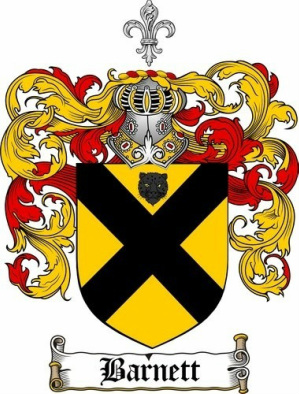 The following was published in the Belfast Ireland Times in 1858 by R. M. Sebbets, Historian

There was a William Barnett, born ca 1609 who came from Scotland to Ireland prior to 1634, who was a weaver, a manufacturer of wool, and he settled in Londonderry, Ireland where he died 5 January 1652 and was buried there. His wife Margaret was born ca 1613 and she died in Londonderry, 19 Feb. 1682. 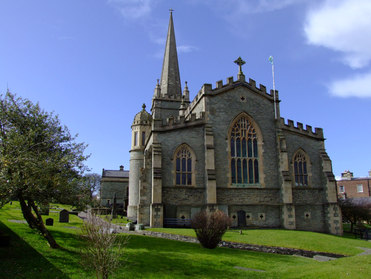 Vital records sent to me by Vic Barnett 10-7-2011
from photocopied records obtained from the St. Columb's Cathedral, Londonderry, Ireland

Was William Barnett with wife Margaret Preston the Margaret that Henry Egle has as the wife of  William, brother of John 1678 marrying a Margaret_______?

Who was Charles Lott Hess, relative of John & Jennette?

(at the time, Hanover was part of Lancaster County)

John Barnett , b., 1678, in the neighborhood of Londonderry, Ireland, in company with his brother, William Barnett, emigrated with his family to Pennsylvania prior to 1730, locating in Hanover township, then Lancaster county, being among the earliest settlers in that township. He died in September, 1734, his will being probated at Lancaster on the first day of October following. John Barnett left a wife, Jennett, and the following children, all born in county Derry, Ireland:

from them most of the names in the South have sprung.  (and there were many)

John Barnett's grandson William Barnett (the son of John Barnett Jr.) was also born in Londonderry, Ireland, which may provide a clue about when the family emigrated from Ireland. William Barnett eventually settled in South Carolina, according to the History of Kentucky (available online from Google Books).

The surname Barnett appears to be one of the earliest found in Scotland annals.  The first possessions of the family were situated in Fifeshire.  Hamilton of Wishaw, acquired from Barnetts the adjoining lands of Weddershire, has in his possession five charters, one without date, confirmed by King William, anno 1165, another by Roger de Quincy, constable of Scotland, who flourished between 1200 and 1232, to John Barnett of the lands of Parbroach and Kinsilef confirmed by William of Lamberton, bishop of St Andrews, who was in that see from 1298 to 1328.  George Barnett of that ilk and in the County of Fife, chief of all the Barnetts in Scotland, lived in the reigns of James IV and V, died leaving besides other sons, David Barnett, born in 1560, who became eminent as a physician and was a great traveler.  He acquired the lands of Aberbothrie and the others which were created.

My branch of the Barnett Tree

To the best of our knowledge, the beginnings of our line was William Barnett who was born in Scotland in 1600.  The Barnetts and other Presbyterians were removed to Northern Ireland due to their religious beliefs and remained there until about 1730 when our John born 1678 in Ireland and his brother William left for the New World.
They landed at the Port of Delaware and settled in Pennsylvania.  Their home was on the banks of the Susquehanna River in Chester, now Lancaster County, Pennsylvania.

About 1740 they migrated to Augusta, now Nelson County Virginia, along the banks of the Rockfish River at the base of the Blue Mountains.   Our ancestors were patriots in the Revolutionary War, politicians, educators, clergymen, missionaries, surveyors, pioneers, farmers and mountain people.  The Scotch-Irish were the predominate settlers of Appalachia.
Their lives took various paths, but they had one thing in common; after hundreds of years of persecution by England, they were always ready, able and willing to fight for our freedoms.

My direct ancestor, Alexander Barnett was born in 1754 in Virginia and married Dorcas Long about 1779.  After his service in South Carolina, he and other members of their large family settled mainly in Bourbon, Madison and Ohio Counties of Kentucky.   After the death of Alexander in 1826, per his will, his son John I. Barnett purchased land in Illinois for himself and his sons.   They were instructed to settle on land "not tainted by slavery."  Barnett Township, just outside of Clinton, Illinois was named after them.   When I visited there in 2008 I was unable to find any Barnetts.   I did see the small town of Kenney where my grandfather was born.  Kenney was named after John I. Barnett's wife Sallie Kenney's family.
It was common in the Scots-Irish AKA Ulster Scots culture to marry their cousins.  This contributed to much confusion with regards to sorting them out; especially since most of them were named John, James, Robert, Joseph and Alexander.
From Kentucky, my branch went to Illinois.  Others in the family went to Indiana, Missouri, and other points west and south.

My Barnett line ~ to the best of my knowledge

"Dr. Alexander Barnett is the ancestor who assisted in establishing American Independence, while acting in the capacity of private in the South Carolina Continentals and Militia.

December 1779 transferred to the 8th Company of the 1st Regiment.
In Garrison at the siege of Charleston in 1780."

Horseman in Captain Joseph *Vince's company of the South Carolina Militia, April to June 1781.  *Should be Vance?

Documents are in the Historical Commission of S.C. for Militia duty,
War Department, Washington D.C. for service in the Continentals.  Service verified by certificate from War Dept.

Daughters of the American Revolution record # 86561

Daughter of James Kenney and Mary Frame.  James and Mary were both born in VA and died in KY.

James Kenney's father was named Barnett Kenney, born in Ireland in 1726.  He served in the PA line of the Revolutionary War.

Daughter of Mahlon Hall and unknown from VA.

Daughter of Charles E. Hutchin and Mary Brelsford  both born in Ohio and died IL

Virginia births in either Staunton or Augusta County

Therefore, the 2 Alexander Barnetts born in VA and died in KY were cousins.  Another of Alexander and Jane's siblings married a cousin.  One descendant is in possession of a letter written by Col. James to his sister Jane in Ohio County, which backs up the information regarding her marriage & parentage.

I verified the marriages of Mary Montgomery's children (named in her will) in Madison Co., KY. and at the Kentucky Archives in Frankfort.

I am in possession of a copy of the original will of Robert born abt 1730, naming Mary & his children

Mary Montgomery Barnett moved to Madison County after Robert's death in 1787.   Her will is dated 1807 and is located at the Bourbon Co., KY courthouse in Paris, KY.

The information in Madison County records, as well as many narratives by descendants and information from The Kentucky Historical Society backs up this theory.  I have found no birth year for Alexander in these new records, but it fits the timeline, and there is no evidence that he was the son of anyone else.   The birth year and descendants of Alexander born 1745 is well documented.

Some information is from the research of Thelma Murphy, the author of 15 published books/manuscipts on the Barnetts, and 11 on related subjects.
(listed on Worldcat.org & housed at the Indiana State Library.)

From: History of DeWitt County, IL, Descriptive of the Scenery, and biographical Sketches of the Prominent Men and Pioneers, W.R. Brink & Co., Philadelphia, published 1882.

"The Barnett family is allied with the Scotch house of Livingston, and in the sixteenth century a branch was transported from Scotland to county Derry, Ireland. The Barnetts were prominently associated with the political life of Belfast and Dublin and with their educational and benevolent institutions. One of them held the office of mayor of Dublin, and another served in defense of Londonderry. This family were the founders of the Presbyterian church in Ireland. . . ."4

The Barnetts were a Presbyterian family, driven by the Church of England under King James I from Scotland to Londonderry, Northern Ireland before 1634. Between 1728 and 1730, continuing persecution drove then on to America.15c

This country, the asylum for the oppressed of all land, has been greatly enriched by virtue of religious persecutions throughout different parts of Europe. Perhaps none of these persecutions has contributed more of patriotic zeal in proportion to the number who sought homes here, than that of the old Scotch Presbyterians, driven from their mountain fastnesses, they first sought protection in Northern Ireland, and from thence came thitherward to this class belong the ancestors of A. L. Barnett when William Penn was directing the tide of emigration to his colony near Philadelphia they joined the movement; thence went to Virginia.

So that John Barnett, the father of the subject of this sketch, was born in Augusta county, Virginia.  His wife Sallie Kenney, was of the same stock with himself.  About 1789 the Barnetts threaded their tedious way over the mountains to “Kentucky, the land of promise" in the eyes of the pioneers, John riding behind his father on a pack-Horse.  They located in Bourbon County, where Alexander was born October 15, 1810., being third in the family in order of birth. At present there are but three living: Alexander, James and Sarah; whilst Robert Franklin, Mary (who was killed by lightening), Juliet, Elizabeth and William have passed away.  Mr Barnett acquired a fair education when young, which has become rich in experience during his active life. He came to DeWitt County in the year 1832. Was elected surveyor (the first in the county,) May 6,1839, an office he held continuously for twenty years and six months, then after a respite of almost equal time he was again elected in 1879, and now holds the position.  Politically he has been during most of his life a Democrat, having cast his first ballot for Martin Van Buren. In 1832 he lost his vote (a fact always regretted, as he was an admirer of Andrew Jackson), because being on his way home from Kentucky to Illinois; but he had the honor of seeing a number of enthusiastic Hoosiers drinking to 'Old Hickory's health. Of late years, he has identified himself with the Greenback Party.
He married to Elizabeth H. Hall, November 20, 1834, by whom he has had twelve children, five of whom died in infancy - three of them being triplets and died quite young, - and there are now living six.  His wife is a most estimable woman, a member of the Christian Church, and quite an active laborer in the Master's cause.  Mr. Barnett is possessed of a strong, vigorous mind, excellent constitution and great determination of character.
He is a man whom his neighbors love to honor. 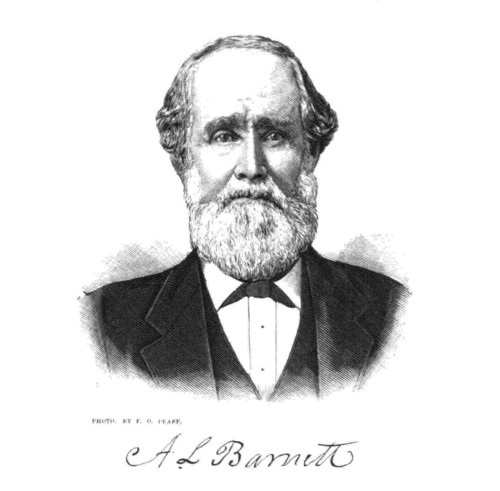