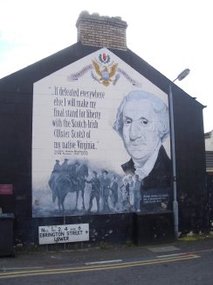 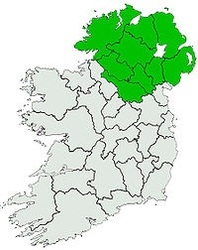 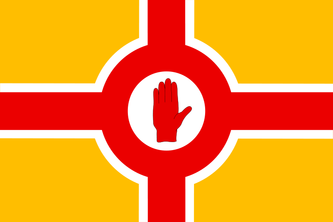 George Washington himself is quoted as saying: "When our friendless standards were first unfurled, who were the strangers who first mustered around our staff, and when it reeled in the fight who more brilliantly sustained it than Erin's generous sons".
He, like his son was referring to the Scotch-Irish from Northern Ireland.

"Fourteen United States presidents were descendants from the small northern corner of the island of Ireland.  More than seven Pennsylvania governors were descendants of the Scotch-Irish as well as many U.S. senators, congressmen, judges, and other prominent people from all walks of life."

Who were the Scotch-Irish?

The term "Scotch-Irish" is an American term adopted by descendants of this group in the 19th century to describe their ethnic origins, and to distinguish themselves from the Irish Catholic immigrants who came to America after the potato famine of the late 1840s. The British, Irish, and Canadians prefer the term "Ulster Scots" to describe this group. They numbered 250,000 by 1775.

The earliest settlers of the Cumberland valley were mainly Scotch-Irish. These people came from Northern Ireland and they were descendants of the Scotch Presbyterians that had migrated from Scotland to Northern Ireland during the reign of King James I of England. This ruler, a Protestant, had encouraged people from Scotland to cross over into Ireland, a distance of eleven miles, by water, and take up land that had been seized by the English crown. The Irish, who were dispossessed, were Catholic and had revolted against the crown because of restrictive religious laws that had been imposed on them.

Thousands of Scotch families went to Northern Ireland and settled in the counties of Antrim, Armagh, Caven, Donegal, Fernmanagh, Londonderry, Monaghan, and Tyrone. This is the part of Ireland where religious conflict between Presbyterians and Catholics continues to this day.

The island of Ireland is about the size of the state of Maine, and is divided into four provinces or regions: Leinster in the southeast, Munster in the southwest, Connacht in the far west, and Ulster in the north
The Ulster Scots in Ireland were largely Presbyterians. During two and a half centuries after the first plantation of Scottish Presbyterian colonies in Ulster, ca. 1606, they maintained a close connection with their homeland, while they remained a race apart from their Irish and English neighbors. They were hated by the Roman Catholics of Ulster, whose land they had usurped. They were despised by the English, whose Government and Established Church inflicted persecution upon them due to religious non-conformity.
The Ulster Scots kept their racial strain pure in matters of intermarriage. They sent their sons to Scotland to be educated for the ministry, etc. Many of them married there before they returned to Ulster. Thus they remained under the influence of Scottish religion, philosophy, and family ties to their early and some later generations.

Unfavorable economic conditions in Ireland by the early-18th century caused many Protestant families in Ulster to consider emigration. Trade legislation enacted by the English Parliament discriminated against Irish goods and produce, causing hardship. Bad harvests and crop failures discouraged farmers, as did high rents on farm land. The tithe (a tax on agricultural produce), which was paid to support the established Church of Ireland, was especially resented by the Presbyterians, who were termed dissenters in Ireland. In Scotland, the Presbyterian Church was established and supported by tithes, so the Ulster Scots resented being treated as dissenters in Ireland.

After James I the English government did not always protect and encourage these Scotch-Irish in their new homes and because of difficulties with Roman Catholics and later English rulers, many of them began to come to America. When William Penn founded Pennsylvania as a colony for free lands, free religion and self government, thousands came. In September of 1736, for instance , one thousand immigrated to the colony.

Throughout the reign of Charles II, the harshness of the law in Scotland and Ireland led to many plans for removal to America, and it is known that small settlements of immigrants from these countries were established in Maryland, Pennsylvania and the Carolinas prior to 1685. Under Queen Anne (1702 - 1714) the Presbyterians in Ireland again lost almost every advantage that had been gained, and became by the Test Act of 1704 virtually outlaws. Their marriages were declared invalid and their chapels were closed. They could not maintain schools nor hold office above that of a petty constable.
Scotch-Irish, who migrated from about 1717 until the Revolution in a series of waves caused by hardships in Ireland. They were primarily frontiersmen, pushing first into the Cumberland Valley region and then farther into central and western Pennsylvania. They, with immigrants from old Scotland, numbered about one-fourth of the population by 1776

The Scotch-Irish began to fill the Valley, clearing the forest and carving out their farms. Between 1771 and 1773 over twenty-five thousand came. These people were the true pioneers of the Cumberland Valley.

"Taxation without representation," the forced selling of the American colonist's products only as England dictated, and the taking away of their religious and personal freedoms only infuriated the Scotch-Irish colonists and they resisted it.

In the 13 colonies overall in 1776, about two-thirds of the population were for the patriot cause, or for independence from England. The Scotch-Irish were among the first to volunteer to fight the British in 1775.  They comprised about 30% of the Patriots.  General Washington stated that they were the driving force in defeating the British.

How did the Scots make a living in the US?
Any way they could, as farmers, soldiers, blacksmiths, cattle-ranchers, lumber men, factory workers, whatever way they could succeed.

What traditions did they bring to the US?
They brought their language, which influenced American English to some extent, particularly in Appalachia, but more than anything else, they brought their music, especially fiddle-music, which became what we know today as American "bluegrass" music.
The Scotch-Irish who settled in America were descendants of the Lowland Scots who were robust, adventurous, and rebellious. There is no architectural style or type of furniture attributed to them so, in turn, there are no known artifacts surviving that are specific to the Scotch-Irish. But the legacy they did leave behind for future generations is their religion.In each settlement they built a church in which to practice their Presbyterian faith.

Education
Our fathers were an intelligent and moral people. School houses and churches rose in every settlement after the cabins of the settlers.
It was the Scotch-Irish who also struck the lustiest blows for learning. Although they often lived in primitive conditions, these Presbyterians--like their theological counterparts in New England--were bent on being literate.
Not only did they rear their offspring in the company of the ABC's, the catechism and prayers; they also tried to provide themselves with a number of learned clerics.
In their schools, reading, writing, arithmetic, trigonometry and practical geometry were the branches chiefly taught, as they were of most immediate use.
The Bible was the standard daily reader (in school) and on Saturday morning, the Assembly's shorter Catechism was recited by all the schools as a regular exercise.

The Scotch-Irish were military leaders and prominent lawmakersfrom the beginning of the colony's history through all dangers (including Indians) and especially during our fight for freedom and human rights. They helped write the constitutions and frame our fundamental laws. Fourteen United States presidents were descendants from the small northern corner of the island of Ireland. More than seven Pennsylvania governors were descendants of the Scotch-Irish as well as many U.S. senators, congressmen, judges, and other prominent people from all walks of life. Davy Crocket, Mark Twain, Andy Jackson, and Sam Houston were all of Scotch-Irish descent. Some familiar local Scotch-Irish surnames are Allison, Craig, McLaughlin, McLanahan, McDonald, McDowell, McCrae, Alexander, Chambers, and Davison, and Laird

What is the status of the Scots in the US today?
The Scots in America today are your typical Americans. They are the hard working, materialists who generally try to conform to the Norman Rockwell image of America. They are the backbone of the American economy and political system, the very foundation upon which America was built. If it were not for the Scots and the hatred of oppression, and love of freedom in its fullest measure that they brought with them, America would probably still be a British colony.

abstracted from The Scotch-Irish, A Social History by James G. Leyburn, published by The University of North Carolina Press, Chapel Hill, copyright 1962, ISBN 0-8078-4259-1, LOC Cat.#62-16063. This publication covers the whole migration of lowland Scots from Scotland to Ireland and A History of the Greencastle-Antrim Community 1736-1971, William P. Conrad, 1971  Contributed to Genealogywise.com by Kathryn Brannigan Walizer